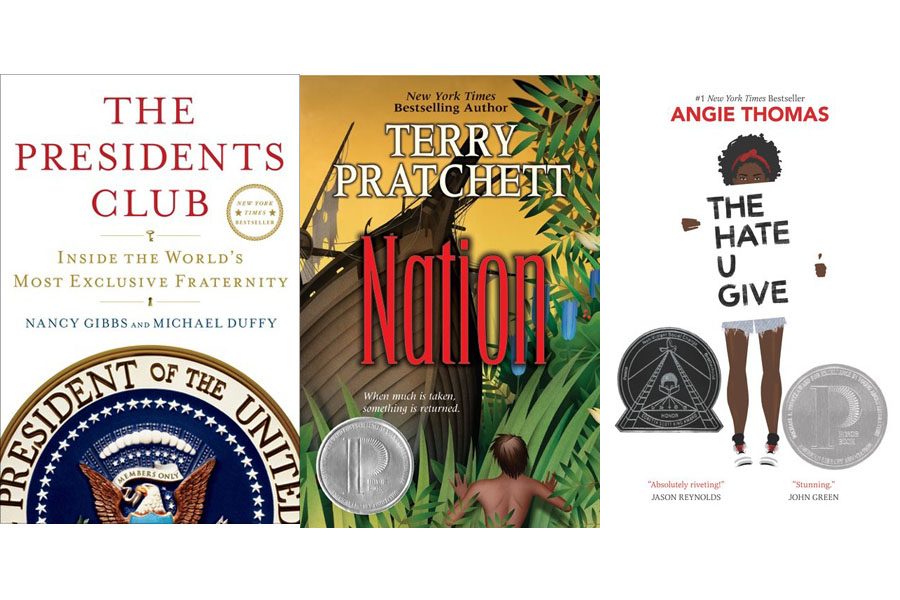 Need a good read for those long winter nights still ahead of us in 2019? Who better to ask than our three media specialists right? We asked them to pick one title only to recommend to student readers. Here’s the picks:

“The Presidents Club which is about the former presidents and their interactions with each other so they form a club and try to work with current president.”

amazon synopsis: The Presidents Club, established at Dwight Eisenhower’s inauguration by Harry Truman and Herbert Hoover, is a complicated place: its members are bound forever by the experience of the Oval Office and yet are eternal rivals for history’s favor. Among their secrets: How Jack Kennedy tried to blame Ike for the Bay of Pigs. How Ike quietly helped Reagan win his first race in 1966. How Richard Nixon conspired with Lyndon Johnson to get elected and then betrayed him. How Jerry Ford and Jimmy Carter turned a deep enmity into an alliance. The unspoken pact between a father and son named Bush. And the roots of the rivalry between Clinton and Barack Obama.

Heather Fields: The Hate U Give by Angie Thomas

“The Hate U Give because it does a really good job of describing things that go on today in a society and it does a good job of not glossing them over.”

amazon synopsis:Sixteen-year-old Starr Carter moves between two worlds: the poor neighborhood where she lives and the fancy suburban prep school she attends. The uneasy balance between these worlds is shattered when Starr witnesses the fatal shooting of her childhood best friend Khalil at the hands of a police officer. Khalil was unarmed.

Soon afterward, his death is a national headline. Some are calling him a thug, maybe even a drug dealer and a gang-banger. Protesters are taking to the streets in Khalil’s name. Some cops and the local drug lord try to intimidate Starr and her family. What everyone wants to know is: what really went down that night? And the only person alive who can answer that is Starr.

“Nation is about a boy who lives on a remote tropical island. A tsunami wipes away the boy’s entire civilization, and only a few remain to remake society. Terry Pratchett fills this book with dry British humor, interspersed with adventure and philosophy.”

amazon synopsis: When a giant wave destroys his village, Mau is the only one left. Daphne—a traveler from the other side of the globe—is the sole survivor of a shipwreck. Separated by language and customs, the two are united by catastrophe. Slowly, they are joined by other refugees. And as they struggle to protect the small band, Mau and Daphne defy ancestral spirits, challenge death himself, and uncover a long-hidden secret that literally turns the world upside down.