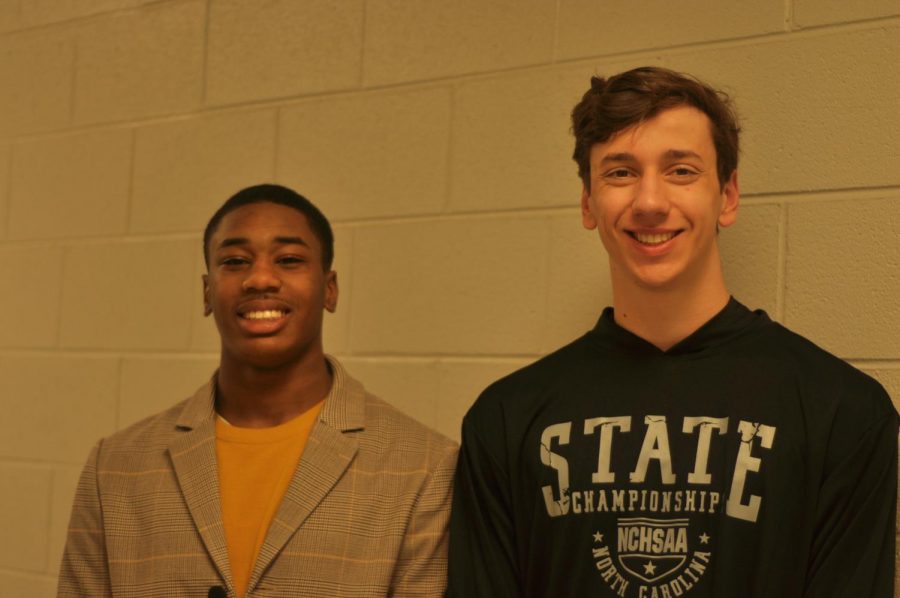 Seniors Gideon Bezuidenhout and Melvin McLawhorn oversaw a significant rise in accomplishment for the boys’ swim team over their four-year Cougar careers. We caught up with them to reflect on their journey to states their final season.

Q:  How long have you been swimming?

Q:  Describe the growth you have seen in the team over the past four years.

A: (Melvin) I remember my freshman year coming to to Wake Forest. Nobody knew how to do flip turns, and I was like “what in the world is going on?” And so Gideon and I taught everyone how to do the flip turns. We really didn’t think we would end up going very far. Now, four years later, we have come a long way making states and actually placing top ten.

Q:  Describe the high school swimming competition in our area.

A:  (Melvin) The high school swimming competition is very competitive, especially in North Carolina, NC is actually ranked 3rd in the US for swim, so it’s pretty competitive.

A:  (Gideon) North Carolina is really fast; it is one of the fastest states.

Q:  What is your favorite moment from the past four years?

A:  (Melvin) The greatest moment was when me and the boys finished off the season with the 200 freestyle relay, and we placed 10th in the state, which was a really good feeling.

A:  (Gideon) Making states last year was really cool because it was the first time we had made states, so it felt really good to do that.

Q:  How did you feel qualifying for regionals and then states?

A:  (Melvin) I felt really great. I had qualified for both regionals and states all four years, but for this year to be my last time, it felt more special to me.

A:  (Gideon) Regionals was pretty easy, but states was really good because we didn’t get it last year, and it’s my senior year, so we finished out our school swim career strong.

Q:  Who/what sparked the biggest change in your team throughout the years?

A:  (Melvin) Tate Bacon made a big change. He was the extra push that we needed to have a strong, set team to make it to states. Without him we wouldn’t have went.

Q:  What was the biggest challenge for your swim career?

A:  (Melvin) I didn’t really struggle with waking up early for the morning practices, but balancing my school work, especially my junior year with the practice and meets, my schedule was difficult.

A:  (Gideon) I broke my rib over the past summer, so trying to get back into shape was pretty hard, but it ended up healing pretty well.

Q: What is one thing you wish everyone knew/understood about swimming?

A:  (Melvin) Swimming in not an easy sport. It takes a lot of technique and skill. It is really tough.

Q:  Do you plan on pursuing swim in college? If so how/where?

A:  (Melvin) I am on the fence. I’m thinking about going to Howard for swimming, but I’m not really sure yet.

A:  (Gideon) I’m going to Kind University next year to go swim.

Q:  Who is your biggest supporter or motivator or mentor and why?

A:  (Melvin) My main motivator is my parents because they kept on pushing me to do my best and to rise as a leader even when our team wasn’t that good, and I lost faith in our abilities. They told me to stick with it and enjoy my team as well as our growth. My mentor is coach Richards. He is a great coach and cares for us. He carries spirit of the school with him to all our meets and practices.

A:  (Gideon) Probably my coach from club team. He helped me recover after breaking my rib.

A:  (Melvin) I don’t know if I will miss getting up early, but I will miss all our memories and just laughing with my teammates as well as just being with the team in general.

A:  (Gideon) I for sure won’t miss waking up for the practices.