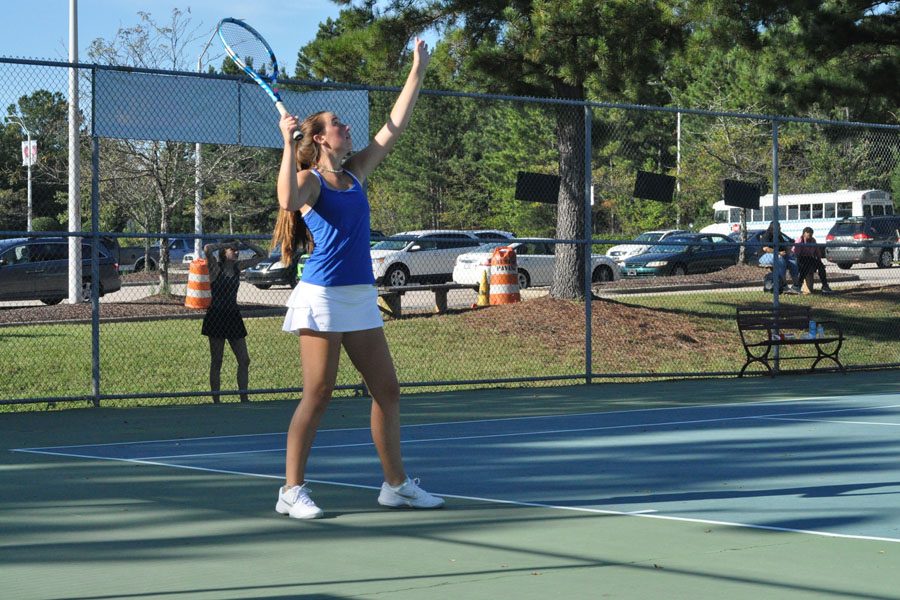 Junior Katie Dickerson was ranked the number one player on the girls’ tennis team. Dickerson wants to play for fun in her free time but also finds interest in club tennis.

With the intent and motivation to become #1 seed, Dickerson became the star tennis player, and her unhappy emotions towards the senior players leaving didn’t get in the way of her season goals.

“My goals were to win as many matches as I could and play my best,” Dickerson said.
Dickerson’s seed meant she faced the best opposing teams had to offer.

“I’m excited that I was ranked #1 on the team. It gave me a chance to play really good players,” Dickerson said.
She didn’t start playing at a very young age, but has come a long way in a short amount of time with the help of her family.
“I have been playing for five years,” Dickerson said. “There are tennis courts in my neighborhood, and my dad played and introduced me to it.”

“I enjoy spending time with all the girls on the team and getting better at tennis each day,” Dickerson said.

Tennis coach Brian Lesh thinks Dickerson has come a long way since she first started playing for the team.

“Katie moved from number four player to number one. I believe if she puts in as much work as she did this season, she’ll be tough to beat,” Lesh said. “Her willingness to accept feedback has helped her grow throughout the season.”

Dickerson is going to miss the departing seniors, but is excited for the next season.

“I’m sad that the seniors are leaving next year, but grateful for them being on the team this year,” Dickerson said.

Rachel Davis one of Dickerson’s teammates, they compete to make each other better and make a better friendship.

“She is just really humble and very friendly. She is always trying to motivate the rest of the team,” Davis said.