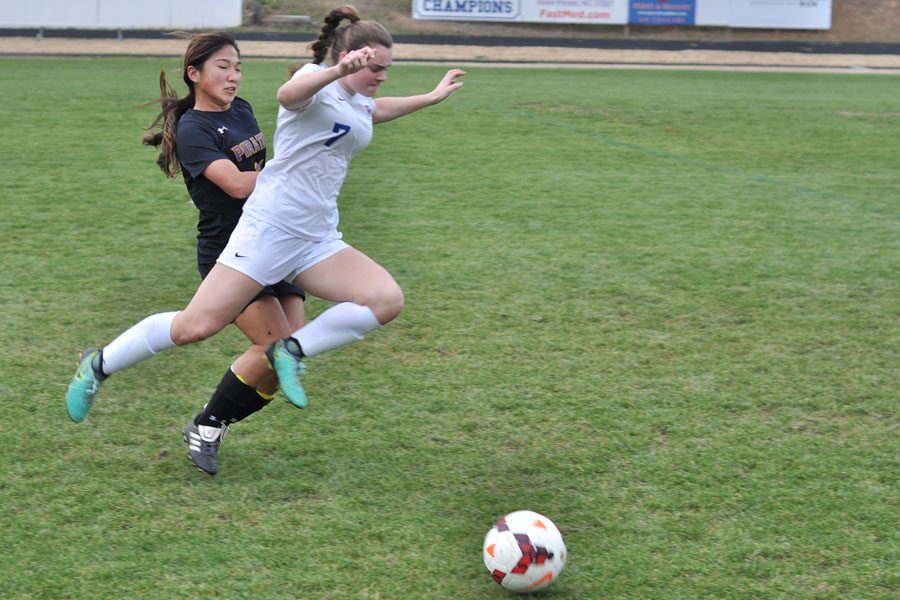 Forward/Midfielder Hannah Dion surges past a Corinth Holders defender during a home conference game. Dion led the team in scoring three of her four seasons.

You may know her as a soccer player, a student, a swimmer, a JROTC cadet or a Trentini Scholarship finalist: Senior Hannah Dion wraps all of those things into one.

Dion has been playing soccer since 2006.

“I love that even though I’ve been playing for the majority of my life, each time I step onto the field there’s a new challenge, a new dynamic and a new feel to the game,” Dion said.

Varsity coach Jeremiah Mattingly says Dion is, “Energetic, passionate, and shows a lot of desire.”
“Obviously her speed is one that stands out soccer wise, but I also think she just has that attitude of a great player. She is one of the first to help out. She’s a good leader. She’s just a part of the team. She’s just Hannah,” Mattingly said.

Hannah is known all around as a great teammate.

“Hannah always looks out for every teammate. If someone gets hurt or sick, she always texts them to make sure they are okay and if they need anything. Hannah is a kind soul and is always a helping hand, “ junior Olivia Speight said.
Dion, who has 4 goals in her 2018 season, always wanted to play college soccer.

“It’s been on the radar from the get-go. I really started wanting to play freshman year when the older club girls were committing, and the coaches lined the sidelines of our games,” Dion said. “Pretty early on,though, I knew that I wanted to be approached by a school that wanted me. I wasn’t interested in playing the political game and convincing a coach that I was what their school was looking for.”

Ultimately, Dion committed to The Citadel, The Military College of South Carolina.

“I was looking for a school that would also fit me academically as well, so I wasn’t dead set on playing Division I.

However, I am so thankful to have found a school that checked all of the boxes: academically there, division 1 soccer and a coach that recruited me,” Dion said.

Speight says she will remember Dion as, “The hardest working and most competitive player on the team. I admire how she pushes herself until she physically can’t go anymore.”
Junior Olivia Rudolph Dion’s teammate on the swim team says she is, “Just a positive person in general.”

“Hannah is a dedicated athlete who puts in 100 percent to everything she does. She is also a great leader and amazing team captain because she is organized and helps the new swimmers,” Rudolph said.

“You can almost describe her as once-in-a-decade type athlete, type student. Just special in a sense that leadership comes natural to her, and all around ability is versatile. She can do so much as far as her talents, and she has a way about her that the same qualities represent her also in the classroom,” Richards said. “What separates her is that good is not enough. She wants to be great. That’s exactly the person that she is, and that’s why she’s so successful.”
Some of that leadership coming from being involved with the JROTC.

“I love that JROTC is a little niche of students with big dreams. Everyone in the program has their own goals and ambitions, and everyone motivates each other to accomplish them. Seeing my friends and fellow cadets accomplishing their dreams, and knowing that I was right there beside them as they did so, is such a cool experience,” Dion said.

The biggest thing Dion has learned in high school is to “Appreciate the little moments. It’s not all about the end result, but the path is takes to get there. The best parts of my day are the laughs with friends and silly videos, and those moments will be what I remember for years to come.”

Dion said, “I am going to miss this close-knit school with all my heart, and am so thankful to have been a part of something so special.”