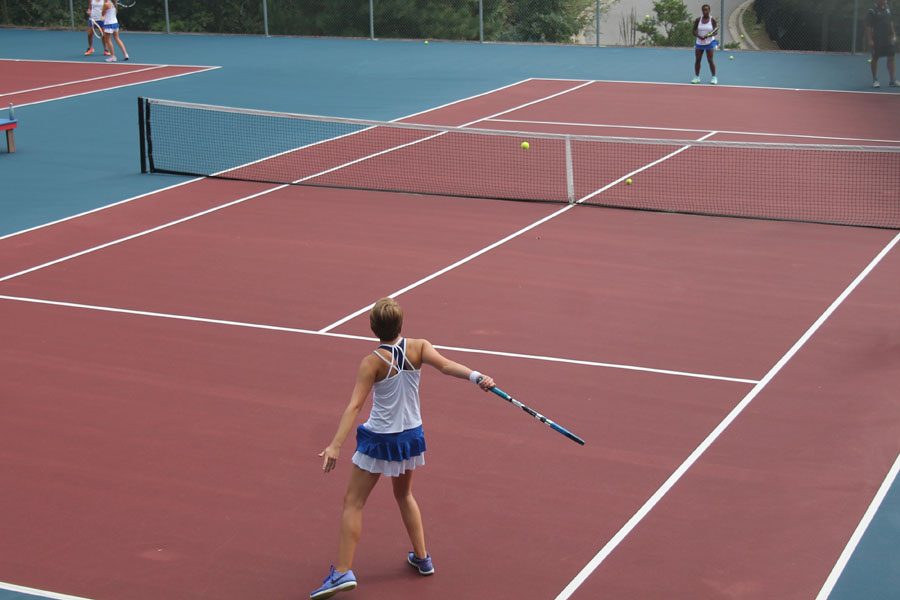 Results from the fall athletic season have improved as many teams have fared better in the NAC-VI than they had in the Cap-8. Among these teams is the girls’ varsity tennis team, finishing in second place, behind Rolesville.

Last season, the team finished with a 5-11 overall record, and 7 out of 8 in the old conference. This year they boasted a 10-7 record, 8-2 in conference play.

Junior Rachel Davis led the team in the first singles spot, with an even record of 8-8. She said the team’s morale was different this year, and the work ethic was greater.

“We’re doing better because I think everyone is a lot more committed. People are practicing more even outside of school,” Davis said.

Davis was named to the all-conference team and finished fifth in the conference match. She also advanced to regionals as an individual player.

Both Sophie Padalecki and Katie Dickerson are some of coach Brian Lesh’s top performers. They are both sophomores, but both played a significant role in the success of the team this season.

Padalecki played in the team’s second singles position, with a 9-6 overall record, while Dickerson obtained a record of 10-1 in the fourth singles spot to finish off the season.

Padalecki felt appreciation for Lesh and what he’s done as the new coach.

“He has been a really great coach. Everyone has been really happy with him, and he’s encouraged each of us,” Padalecki said. “I think the season is going way better because we’ve been winning a lot more, and everyone seems to like coach Lesh a lot.”

Both Padalecki and Dickerson were also named to the all-conference team, and Padalecki finished in third place at the conference match and advanced to the second round of regional play.

Senior captain Trinity Burks finished up her fourth year of varsity tennis with an 8-5 record in the third singles spot.

According to Burks, the team has changed the strategy they use to approach each match.

“I think the line-up is much better. The people in each spot were chosen better, not just based on seniority or anything like that,” Burks said.

Burks and Dickerson were also a doubles pair and won the conference to earn a spot in the regional match.

Dickerson has similar views as her other teammates about the team’s success this season.

Dickerson said, “It went better than I thought it would have, considering we have won a lot more than last year. We did really well in the new conference.