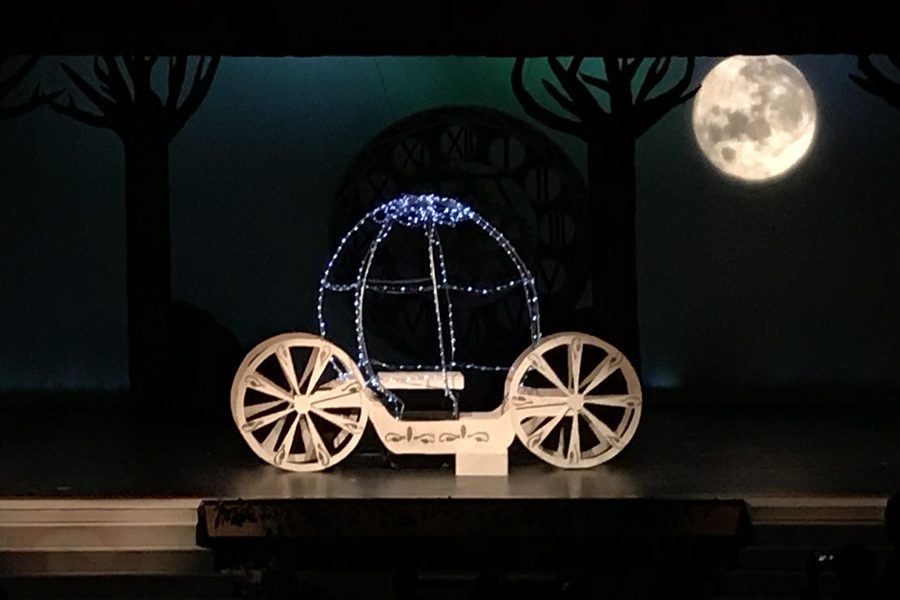 Cazin said she enjoyed the moving parts of the Cinderella production. Lighting the carriage and the moon were two of the principle tasks under Cazin's direction.

When Alexandra Cazin joined tech theater, little did she expect for it to turn into what it is today.

“I’ve been in tech theater for three years now, and the whole reason that I’ve been interested in it was in the beginning, it was just going to be a hobby, and then it turned into something I realized I wanted to do in the real world,” Cazin said.

Tim Domack teaches Technical Theater and was who Cazin mentioned as having the greatest influence on helping her discover her passion.

“Honestly, Domack: he has been cheering me on the longest but also the other students who came before me, doing the same job. Since they were my role models and leaders, it kind of pushed me forward to keep doing this,” Cazin said.

Domack feels that Cazin is a model for his other students.

“I wish all of my students would work as hard as she does. Her work ethic is solid. You give her an assignment: she’s able to carry out the assignment and relay any of the orders to her crew,” Domack said.

Cazin likes that Domack runs his class like it is, “a real work environment, something you get in the real world. Honestly, some days I feel like I should be getting paid.”

Cazin will attend the University of North Carolina School of the Arts (UNCSA) to continue her passion for technical theater, specifically her work with lighting design.

“The plan for UNCSA is to do lighting design with their theater group, running their shows, possibly going into assistant stage managing and certain portions,” Cazin said.

“It is actually a welcoming class. We all work together. It’s like a normal work environment in the real world. It actually makes the play stronger because we are kind of forced to work together, and we have to figure out if the carpenter is doing one thing, you have to make sure that we are able to light the other things,” Cazin said.

As she plans her next steps, Cazin is ready to further her education in the arts and then use her talents as much as she is allowed to.

“Going to college is a great start and just mostly trying to get every job I can possible can,” Cazin said.

Domack couldn’t cite a single example of Cazin’s best work, but for those who saw the spring musical “Cinderella,” they were able to see all of the amazing work Cazin put into the play.

“It’s hard to pinpoint one thing she did that was the best. I think Cinderella as a complete body of work is solid or her best,” Domack said.

Domack referenced some of Cazin’s work that made the production special including the lighting of the carriage, a fireplace special effect and the lighting focus that created the moon.

He also noted her skill at the pivotal moment when midnight comes and the lighting focuses on the clock.

And while Cazin expresses her appreciation for Domack, for him the benefits are reciprocal.

Domack loves to teach because of what he sees in his students, like Cazin.

“I teach because of the drive, the passion that my students have for what we do,” Domack said.

Domack finds inspiration from students who display a willingness to help and a strong work ethic.

And those students help to pull him and the productions through the many grueling hours that happen before a production.

Domack said, “And what is great is every time I ask for volunteers, the same few people raise their hand, but those are the people that keep me going: people like Mark, people like Nathan Morales and Alexandra Cazin. All those people. That is the reason why I continue to teach.”