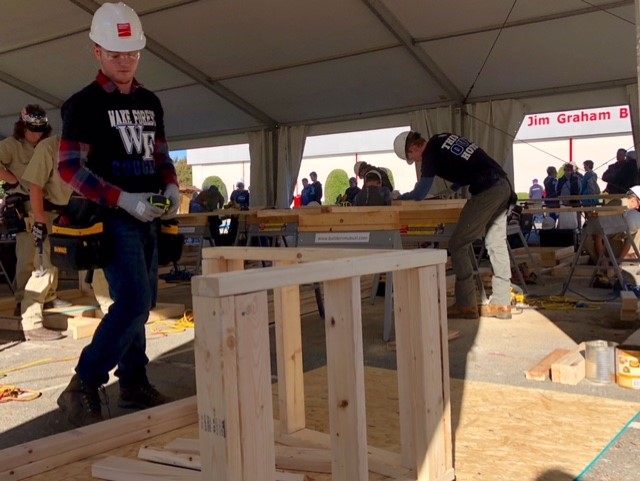 In the school’s ninth year of participating in the Carolina Department of Labor Carpentry Apprentice contest in Raleigh, two students, Ike Perry and Drew Cady, got to participate for the first time.

The two students partnered together to use what they learned from Mr. Bobby Hoffman’s Carpentry class, in the annual competition held as a part of the NC State Fair. Perry and Cady competed Oct. 24.

The students were given specific instructions once they arrived at the contest.

“We had five hours to prepare. We got a plan when we got there that was different from any other plan we’ve gotten previously. We had to build based off the plans. We made a doghouse with housing standards of framing. You had to build it correctly without the use of nail guns. It was just saws and hammers and based on how you interpreted the plans and how far you got along in the five hours,” Perry said.

Hoffman, having participated in the contest before, had objectives for his students to achieve.

“My goal was for them to finish in the top three. They did very well. They had a plan that we hadn’t prepared for, and they adapted and adjusted from what they had remembered from class,” Hoffman said.

Hoffman was pleased with the results, and so were the students. They placed fifth out of 20 teams, and both the students favored the same part of the contest.