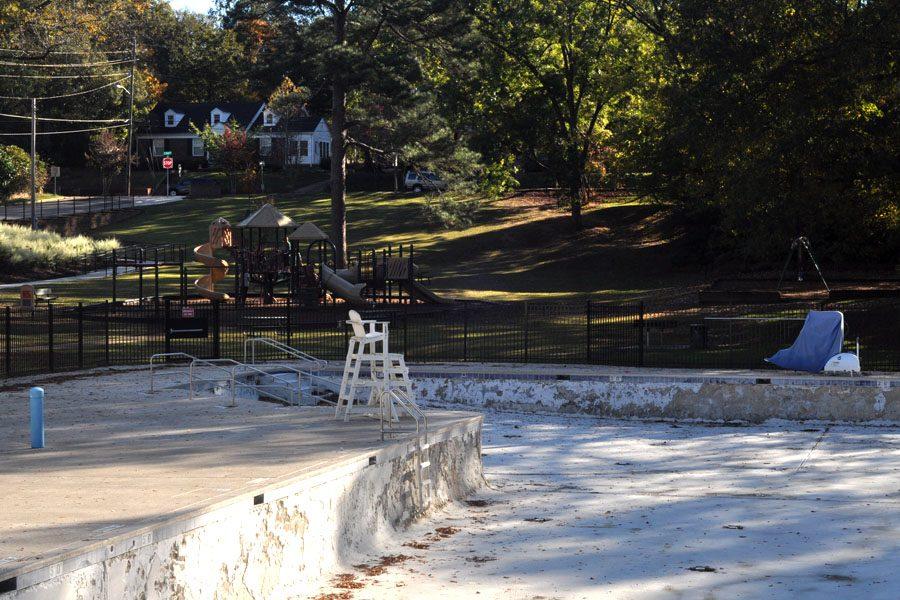 The Holding Park Pool measures at 50 meters. It will remain empty until the summer of 2018.

Summer is supposed to be a time for swimming, popsicles and fun in the sun. Last summer, this trifecta was not attainable for members of Holding Park Pool.

Holding Park Pool, built in the early 1940s has been closed due to leaks and structural damage. This pool has been a part of the Wake Forest Community and children’s lives for 76 years.

Without a town pool, many children would not have an opportunity to take much needed swim lessons and experience the adventure this recreational facility has to offer.

“I read this summer that drowning is one of the biggest causes of death in small children. For this reason, I believe it is important for all children to have an opportunity to learn to swim. There are subdivisions/communities in town that have pools for their members to use, but there are lots of homes and communities in town that do not offer access to a pool,” Mayor Vivian Jones said. “This is an opportunity for recreation just like ball fields and walking trails and other parks and recreational amenities. Without a local pool accessible to all children, there would be many children in our community that would not have this opportunity.”

Ruben Wall director of parks and recreation, also believes that there a town pool adds a much needed area for children to learn safety skills, while still having an outlet for entertainment.

There are three options that Jones and others had to ponder when deciding what to do with the pool.

“First, we could just rebuild the walls that are crumbling. Second, we could build a new pool inside the current pool. Third, we could remove the crumbling walls and other pool infrastructure and completely rebuild the pool. Either one of these options would allow the pool to be used again,” Jones said.

According to Wall, the pool has to be replaced, and if the decision is made to renovate the pool, the project could take from 9 to 12 months.

The Board of Commissions, as well as Jones and Wall, took an objective look at the project in order to pick the most beneficial plan for the community.

“I think everyone wants to take their time to make sure we do what’s best for the citizens, considering this is a 25-30 year commitment,” Wall said.

Because renovating the pool is an issue that needs to have a pertinent need in the community, a survey was conducted to poll the community’s opinions. According to Jones, 82.98 percent of the respondents said it was important to the community to have a pool.

Even though Jones had to look at the project with an unbiased view, she knew the importance of a pool to the community.

Jones said, “I grew up in rural North Carolina in Randolph County. I did not have access to a swimming pool, and I did not learn to swim as a child. When I had small children, I took them for swimming lessons when they were four years old because I knew it was important for them to learn early. I guess this is one of the reasons I believe it is so important for us to provide the pool for our citizens.”

The town met Nov. 1 and decided that a new pool will be built that will include a lap pool, a family pool and a kiddie pool. The pool will cost $2.5 million and is set to open summer 2018.