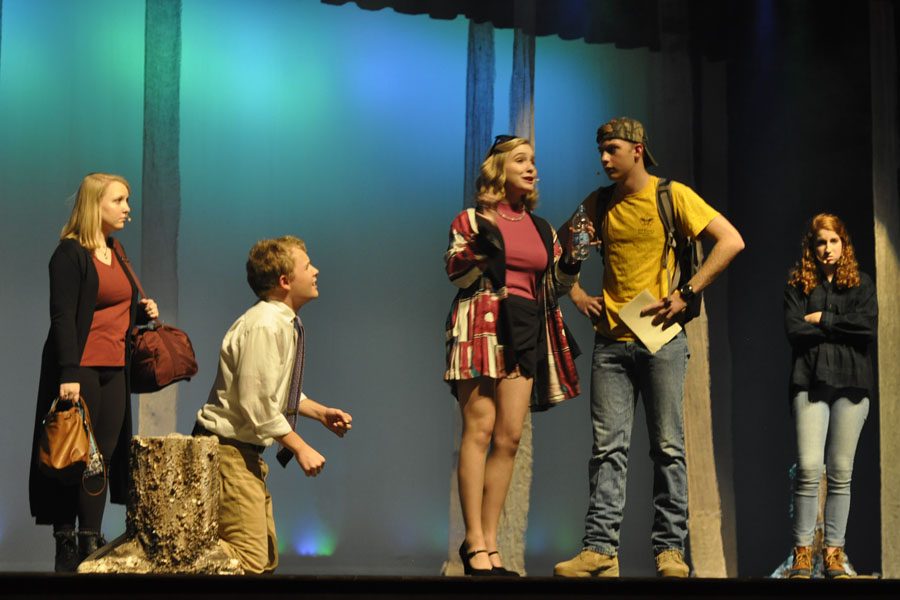 As if singing and acting weren’t enough, seniors Sydney and Savannah Rowlette expand their horizons to now include playwriting.

“We’ve been acting since we were four, writing since 2014,” Sydney said.

The idea to write a play was brought up while they were at the Moonlight Stage Company, a performing arts theatre in Raleigh.

“We were actually in a songwriting class, and we were like, ‘Do you know what would be such a cool idea? If we just put all our ideas together and wrote a musical,’” Savannah said.

When writing breakdowns transpired, they did not allow themselves to stop working.

“You have to keep going. If you get stuck, skip to a different part. If you want to finish it though, you have to be persistent because it gets frustrating, but you can’t stop or else it’s more frustrating,” Sydney said.

The final product emerged after their disciplined schedule.

“We went once every week for three hours, for a year and a half. We wrote the musical and it was really fun,” Savannah said.

Sydney shares the setting and intention of their play.

“It ended up being based upon a summer camp because you meet lots of different types of people at a summer camp,“ Sydney said.

The authors wanted the characters to be recognizable to their audiences.

“The characters are typical stereotypes. They are one way on the outside, but you never know what people are going through on the inside, so it makes you think how you treat people,” Sydney said.

Through the collaborative process with others at Moonlight, the sisters received valuable feedback, but feedback that was not always easy to process.

“If you are doing it in a group, you have to be accepting of other people’s ideas. There were a lot of ideas that we had to adapt to and agree with things that we might not like,” Savannah said. “There were a lot of tears, but also a lot of laughter, so it was a good thing.”

Crookline was performed this past Nov. 1 and 3 at 7 p.m., with Sydney and Savannah both performing in it.

When it comes to either being behind the scenes directing or on stage acting, the decision is a tough one for Sydney.

“Both. That’s such a hard question. My answer is complicated because if I wrote it, I would rather someone else be in it, but I would rather be in things that other people wrote.”

The sisters didn’t have to struggle coming up with new songs during the writing process as Crookline incorporated songs that Sydney and Savannah previously had written in years past.

“I thought it was cool because we’ve been going to Moonlight Stage Company since we were around eight, so a lot of the songs that were used in the musical were written when we were like 12 or 13, and we just brought them back,” Savannah said.

While looking toward the future, Sydney could see herself writing more plays.

“A musical is definitely harder than a play, so I think I’d probably write some more plays in the future. It was nice that we did it as a group because it made it so much easier,” Sydney said.

Savannah plans to continue on with her musical theatre career after she graduates.

“I, of course want to go to college. I’m not sure where yet, but wherever I go I want to do musical theatre. People tell me that it’s risky, and I’m like, ‘You know what, it’s fine. It’s what I love to do,’” Savannah said.

Savannah said, “I’m hoping to always have some type of theatre, acting and vocal performance in my life because that’s literally like my favorite thing in the world. Wherever life takes me, I just want to keep doing that.”